Hob timers for vulnerable people: are they good enough and what’s the alternative?

In this post, we’re taking a look at stove timers for vulnerable people and an alternative that might just change your mind about hob safety. The safe use of a hob is still the responsibility of the person cooking, but do hob timers really improve hob safety? Are they really good enough for an elderly person or someone suffering from a cognitive impairment or disease such as dementia? As a carer or relative, you will likely have many concerns about hob safety and the people under your care. Hob fires are almost always caused by human error and this risk is greatly increased in elderly and disabled users. So, it’s never a bad thing to install a safety device to protect those in need and prolong their independence. Let’s look at what a hob timer is and what’s involved with using one. We’ll also show you why an alternative device provides far greater safety and value for money.

The what and how of hob timers

A hob timer is a device that is installed to an existing electric hob, or is included as part of a specific electric hob design. The unit cuts the power to the hob either when the timer runs out, or after the timer has run out and a subsequent alarm has sounded and been ignored. Some are user programmable but most are preset to a specific time limit, usually 15-60 minutes. Timers often require the user to activate them before, or in conjunction with, turning the hob on, adding an extra step before cooking can start and an extra step for the user to learn. They are also indiscriminate toward temperature so it makes no difference whether the hob is set to simmer or on full power.

So, knowing this, do you think hob timers can help with forgetfulness, loss of functional capacity, or unintentional misuse? Are they suitable for people with a mental disorder or disability that affects memory, or for an elderly person who just wants to turn the hob on and start cooking, without setting a timer first? Does a timer also present a false sense of security, encouraging you to leave the hob unattended while something is cooking, knowing that in 15 minutes it will turn itself off?

How long does it take for a hob fire to start? You might be surprised but a hob fire can start in well under 10 minutes, so timers rely on the user being present and able to turn the power off if anything goes awry before the timer runs down. This is fine if you’re simmering a soup or a casserole, but if you’re unable to react immediately to an issue with a hob on high power then the risk of a fire starting remains as high as before, regardless as to whether you have a timer fitted or not.

The fact that timers do not take into account how an incident develops can be a major problem as they are unable to react to dynamic situations and act before a fire starts. It is complete guesswork as to whether a fire will start before or after the timer runs out, and therefore whether it will leave the hob safe, or remain blind to a potentially fatal situation in full swing, unbeknown to the person it is trying to protect. It becomes a moot point if a fire starts before the timer runs out. And the risk is increased further if the pan is already hot when the timer is set. A fire could be only seconds away.

So, in practical, everyday use, a hob timer can in fact turn out to be wholly unsuitable for a vulnerable person, or anyone for that matter.

"A stove fitted with a timer is not safe enough in the home of a person with a memory disorder."

But before we look at an alternative, let’s get a better idea of the pros and cons of a timer.

Pros and Cons of Hob Timers 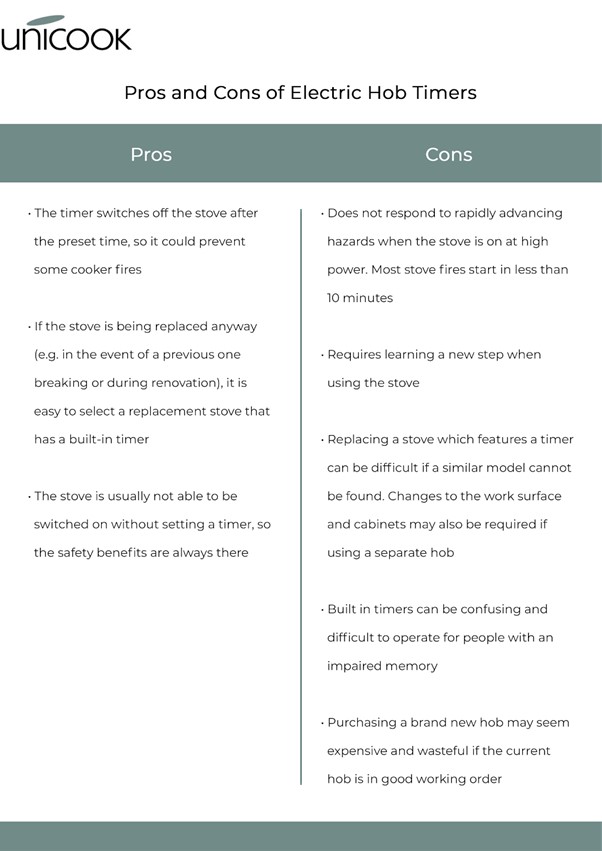 The table above gives a good idea of the pros and cons of hob timers so you can more clearly decide if they are suitable for you or not. But before you make a final decision, we are about to throw a cat amongst the pigeons and show you something that is far more effective and that connects the issue of hob safety directly with the risk of fire.

It’s a little bit of a misnomer calling a stove guard an alternative to a hob timer. They both sit in the same market under the same remit of fire safety, but one of them proactively prevents fires from occurring, no matter how long you have been cooking for, and the other one – as you will have discovered above – is just a timer that may or may not actually do anything productive, or just cause an inconvenience. So a stove guard is less of an alternative, and more like the right product for the job. So, let’s have a closer look at the trick card and delve into stove guards.

Rapidly evolving hazards like hob fires aren’t interested in whether or not you have set a timer to shut off the power, but shutting off the power would prevent a fire starting if it was done in time. This is where stove guards come into play. They monitor the environment using extremely intelligent technology and an array of clever sensors. Products like Airis monitor the temperature of the pan and hob, taking into account the smoke points and flash points of oils (the temperature at which oils smoke and then ignite). They also monitor human presence at the hob to determine if the cooking has been left unattended and the risk increased.

Airis - How it Works

Using this information, Airis calculates when a risk of fire is present and alerts the user with the usual alarm. If the hob is not manually turned down or off, then it cuts the power before a fire actually starts (this could take only a minute, long before a timer would activate). So if there is a problem and the user can’t act to prevent a fire, Airis will have you covered. Airis monitors throughout cooking and responds in real time to prevent rapidly evolving hazards. It can also tell if a pan is boiling dry and act before food burns. It also meets fire prevention standard BS EN 50615. Conforming to this standard involves passing stringent tests in which the device must prevent a fire from starting.

It really does make all the difference and can prolong the valued independence of a vulnerable person.

"A stove guard is a valuable purchase. When it prevents a fire, it pays for itself many times over."

How does Airis prevent fires?

Airis for Those with Memory Loss 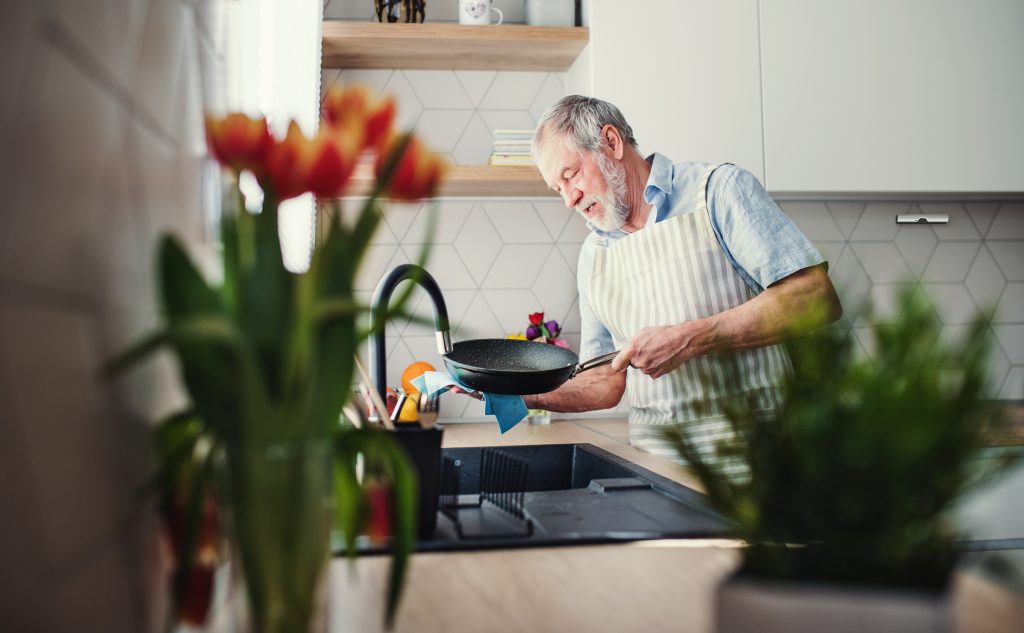 Airis is perfect for people with memory disorders as it does not require any user training. There are no complicated starting procedures or extra steps for someone to learn or become frustrated with. Install it properly, and it just works. So, you can easily see that it’s not an alternative to a timer, but it’s the only thing you should be considering for hob safety. What’s more, it can be installed easily to an existing stove that is already familiar to the user.

If necessary, Airis can also alert carers or loved ones to any dangers, allowing the situation to be investigated, and ensuring repeat issues can be dealt with effectively rather than ignoring them to the detriment of the user.

But What About Cost?

You might be surprised to learn that installing Airis on your existing hob is cheaper than replacing the hob with a new one and a timer. Replacing the entire hob with one with a timer can be extremely problematic if a similar model cannot be found, meaning extensive modifications to the work surface and lower cupboards may be required if the kitchen has a separate hob. This is because most hobs with timers are 50-60cm wide and come as separate units. And that’s before you consider the true cost of a fire, the potential loss of life, lost belongings, disruption, alternative accommodation, insurance claims and premium increases, potentially moving into an assisted home or care facility, and the mental trauma from the event. So, in reality it costs even less than you think!

We have seen what a timer is and how it operates, falling far short of the mark when it comes to practical fire safety, and how a stove guard such as Airis provides proactive fire safety that actually works. We’ve also seen that Airis can be far cheaper than a replacement hob when considering the true cost of a fire. Even so, we would rather pay for an Airis ten times over, safe in the knowledge a fire will never start, rather than take a gamble with a hob timer which doesn’t conform to fire prevention standards.

Questions about installing or retrofitting Airis?

Contact Us
Call Me Back
Rated 5 stars by our customers

Menu
© Unicook 2014-2022. All rights reserved.
We use cookies on our website to give you the most relevant experience by remembering your preferences and repeat visits. By clicking “Accept All”, you consent to the use of ALL the cookies. However, you may visit "Cookie Settings" to provide a controlled consent.
Cookie SettingsAccept All
Manage consent

This website uses cookies to improve your experience while you navigate through the website. Out of these, the cookies that are categorized as necessary are stored on your browser as they are essential for the working of basic functionalities of the website. We also use third-party cookies that help us analyze and understand how you use this website. These cookies will be stored in your browser only with your consent. You also have the option to opt-out of these cookies. But opting out of some of these cookies may affect your browsing experience.
Necessary Always Enabled
Necessary cookies are absolutely essential for the website to function properly. These cookies ensure basic functionalities and security features of the website, anonymously.
Functional
Functional cookies help to perform certain functionalities like sharing the content of the website on social media platforms, collect feedbacks, and other third-party features.
Performance
Performance cookies are used to understand and analyze the key performance indexes of the website which helps in delivering a better user experience for the visitors.
Analytics
Analytical cookies are used to understand how visitors interact with the website. These cookies help provide information on metrics the number of visitors, bounce rate, traffic source, etc.
Advertisement
Advertisement cookies are used to provide visitors with relevant ads and marketing campaigns. These cookies track visitors across websites and collect information to provide customized ads.
Others
Other uncategorized cookies are those that are being analyzed and have not been classified into a category as yet.
SAVE & ACCEPT

We'll call you back!

If you have any questions or if you need advice, we’ll be happy to help.